Dr. Ann Olivarius is the Chair of McAllister Olivarius, one of the leading firms in the US and UK advancing the rights of women. She also is the Senior Partner of AO Advocates, which has won landmark rulings protecting children and adults who are victims of abuse in Britain. After developing her corporate finance skills in the M&A departments of Morgan Stanley and Goldman Sachs, Ann’s career includes service as a strategic advisor for Perot Systems and as head of the corporate department in the Washington office of Shearman & Sterling.

Ann coined the term “date rape” while at Yale, which Susan Brownmiller later published, and was the legal heart and mind behind the filing of the landmark civil rights case Alexander v. Yale, establishing sexual harassment law in the United States. The ACLU has named her one of the nine most influential actors in the history of Title IX, which provides for equal treatment for women in education, and the British academic journal Nature named her one of the 10 most influential people who matter in science given her work for women.

Ann has served on the Boards of openDemocracy, Autistica and Women Moving Millions. She has advised Prime Minister Thatcher, the Chancellor of the British Exchequer, Sir Geoffrey Howe, Microsoft’s Bill Gates, the government of Mexico in its NAFTA negotiations, Queen Rania of Jordan, and the “Queen of Spies” Baroness Park of Monmouth on her work with M16 and in the House of Lords.  Ann also founded and chairs the RHODES PROJECT, which evaluates the lives and careers of women Rhodes Scholars.

Speaking topics include revenge pornography; sexual harassment in the workplace and in higher education; Title IX law; employment discrimination; women and success; cyberbullying; responses to rape and assault; #MeToo and legal responses; and The Rhodes Scholarship. 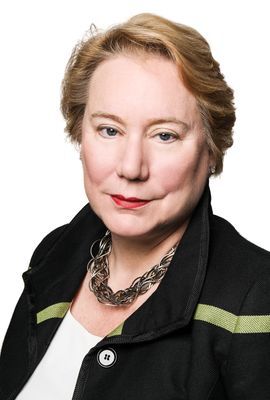 Ann is “a lawyer who has advised me well and who has courageously advanced the cause of justice, and improved life opportunities, for hundreds of millions of women, blacks and disadvantaged, worldwide.” – Nelson Mandela

Being All in for Her: Gender Lens Philanthropy and Investing

Dr. Olivarius has been named a recipient of the 2018 Yale Women Lifetime Achievement Award for her outstanding legal career along with Anita Hill, ‘80 JD, and Catherine Lhamon, ‘96 JD.