Fred Bahnson is an award-winning writer and the author of SOIL & SACRAMENT: A Spiritual Memoir of Food and Faith. “This book is profoundly, beautifully down to earth,” wrote Bill McKibben, “which is almost certainly where we all need to spend more time on a planet in crisis.” Part memoir, part narrative journalism, part spiritual autobiography, Soil & Sacrament tells the story of Anathoth Community Garden, a congregation-supported agriculture project Fred co-founded in 2005 in the North Carolina Piedmont. The book also follows Fred’s journey into the spirituality of food and farming. Along the way he grows mushrooms with Trappist monks, catches a buzz with Pentecostal coffee roasters, and celebrates Sukkot on a Jewish farm. In its starred review Kirkus wrote, “Bahnson’s story is constantly, deeply thought-provoking, claiming that working the land with others ‘reveals the joyful messiness of human life where we find others who need us, and whom we need in return. How we hunger is who we are.'”

Fred’s essays and journalism have appeared in Harper’s, Oxford American, Orion, Notre Dame Magazine, Emergence, Image, The Sun, and Best American Spiritual Writing. His essay “On the Road with Thomas Merton” won a 2020 Wilbur Award for Best Magazine Article from the Religion Communicators Council, and was selected by acclaimed nature writer Robert MacFarlane for the anthology Best American Travel Writing 2020.

His writing awards include a Pilgrimage Essay Award, a W.K. Kellogg Food & Society Policy fellowship, and a North Carolina Artist fellowship in creative nonfiction from the NC Arts Council. Fred has spoken at Yale, Duke, Georgetown, TEDx Manhattan’s “Changing the Way We Eat,” and the 2019 Halki Summit in Istanbul, where he spoke on faith and climate change for an international gathering of environmental leaders convened by Ecumenical Patriarch Bartholomew.

In 2012, Fred became founding director of the Food, Health, and Ecological Well-being Program, a national leadership development program at the Wake Forest University School of Divinity that trains and equips faith leaders, environmental advocates, and activists. He is a member of the inaugural cohort of Religion & Environment Story Project (RESP) fellows at Boston University. He lives with his wife and sons in southwest Montana.

Speaking topics include the connection between food and faith, religion and climate change, contemplative spirituality, Thomas Merton, and the art of literary nonfiction writing. 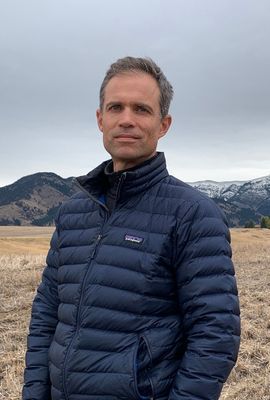 “Tri-Faith Initiative hosted a presentation by and conversation with Fred Bahnson that was one of the best, most informative and thought-provoking Zoom events I’ve seen.” – Faith Matters Series Audience Member

“Soil and Sacrament is a journey of return toward the founding Christian fact: spiritual life is not divorced from natural life, it is natural life bowing to an extra-natural, life-giving, never-ending miracle.” – David James Duncan, author of The Brothers K and The River Why

“This is a very moving as well as a wonderfully intelligent meditation on what is involved in care for our earth. Fred Bahnson succeeds in showing how our practices of cultivating the environment and producing our food can become an integral part of a ‘gospel for all creation.’ In a culture obsessed with both growth and control, his spiritual insight is a gentle but clear challenge.” – Rowan Williams, former Archbishop of Canterbury

“This is a spiritual memoir with real dirt under its fingernails, as deep and gritty and rich as well-tended soil—or Holy Scripture. Fred Bahnson’s vision matters, and the work he writes so beautifully and unsentimentally about has the power to change communities. An important and moving book.” – Sara Miles, author of Take This Bread and City of God

Fred Bahnson on the sacred relationship between food and faith, and our responsibility to care for the land.

Fred Bahnson on the connection between food, the environment and spirituality.

On the Road with Thomas Merton: Fred Bahnson reads his award-winning essay.

In pursuit of a contemplative inner life amid a world in upheaval, Fred Bahnson meditates on maintaining an attentive heart. Read – or listen to – his essay, Keeping the World in Being: Meditations on Longing, in Emergence Magazine.

Read Fred Bahnson’s latest article in Harper’s Magazine, The Gate of Heaven Is Everywhere: Among the contemplatives.