Dina Nayeri was born in Iran during the revolution, and at the age of eight, she became a refugee. She fled Iran with her mother and brother and lived in an Italian refugee camp for two years before being granted asylum in America. Her family settled in Oklahoma.

Today, she is an award-winning author and essayist who writes about the refugee experience. She is the author of THE UNGRATEFUL REFUGEE: What Immigrants Never Tell You, a work of narrative nonfiction based on her acclaimed essay, The Ungrateful Refugee: We have no debt to repay – one of the most widely shared Long Reads in The Guardian.

Her novels include A TEASPOON OF EARTH AND SEA, about a young Iranian woman lifted from grief by her powerful imagination and love of Western culture, and REFUGE—a “lush, brimming novel of exile” (Newsday) and a New York Times editor’s choice. With her brother, she published the popular Another series of YA novels.

Dina is the winner of the 2018 UNESCO City of Literature Paul Engle Prize – honoring authors who contribute to the betterment of the world through the literary arts; a National Endowment for the Arts Grant; the O. Henry Prize; and fellowships from the McDowell Colony, Bogliasco Foundation and Yaddo. She was a finalist for a 2019 Kirkus Prize, a 2017 Rome Prize and has been recognized by Granta New Voices, Barnes and Noble Discover Great New Writers, and others.

Dina holds a BA from Princeton, an MBA from Harvard, and an MFA from the Iowa Writers’ Workshop, where she was a Truman Capote Fellow and Teaching Writing Fellow.

She speaks about the refugee and immigrant experience, identity and belonging. 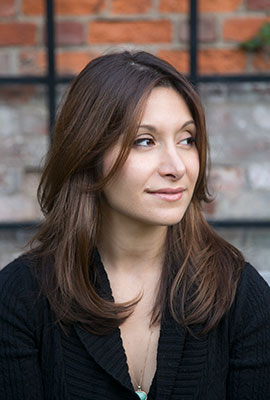 “The event was excellent! Dina is such a lovely, genuine, engaging speaker! I received great feedback all around, from faculty, staff, and students.” – One Book Program, Northwestern University in Qatar

The Ungrateful Refugee is “a unique, deeply thought-out refugee saga perfect for our moment.” – Kirkus Review

“Reinvention may be a necessity for most exiles, but it does not always come naturally; the new identity can graft roughly onto the old. The strains and indignities that come with remaking a life are what give Refuge poignancy and relevance…Nayeri’s prose can be rich and colorful, bolts of words prettily unfurling…Refuge also has the kind of immediacy commonly associated with memoir, which lends it heft, intimacy, atmosphere.” – New York Times

“Nayeri’s…exploration of the exile’s predicament is tender and urgent.” – New Yorker

“Ambitious and richly layered debut… Nayeri unflinchingly evokes the compromises of a young woman monitored by mullahs and gossipy neighbors, but she doesn’t neglect the universal comedy of growing up.” – Vogue Magazine

Dina talks about her new book, The Ungrateful Refugee, on France 24 Morning Edition

Dina Nayeri speaks about becoming a refugee on The Brian Lehrer Show.

Read The Cellar, a new short story by Dina Nayeri for the New York Times Decameron Project – a collection of new fiction inspired by the pandemic.

THE UNGRATEFUL REFUGEE was a finalist for a 2019 Kirkus Prize – one of the richest literary awards in the world!

Dina’s acclaimed long read essay for The Guardian, The Ungrateful Refugee, exceeded 80,000 shares, was named a Best of the Long Reads in 2017 and was anthologized by Pulitzer-prize winning Viet Than Nguyen in The Displaced: Refugee Writers on Refugee Lives.