Kyoko Mori is a critically acclaimed novelist, memoirist and essayist. She was born and raised in Kobe, Japan, a narrow strip of land between the mountains to the north and the inland sea to the south. Although her entire adulthood has been spent in the United States, the dramatic geography of her hometown and the stories her mother told her remain important points of reference in her life and in her work.

Kyoko left Japan at the age of 20 to study creative writing in the U.S. The events that precipitated the move – her mother’s suicide, her father’s remarriage, and her determination not to become a Japanese housewife – also inspired her first and almost biographical novel, SHIZUKO’S DAUGHTER. The coming-of-age novel was hailed by the New York Times as “a jewel of a book, one of those rarities that shine out only a few times in a generation.”

Kyoko is the author of seven books including the memoirs YARN: Remembering the Way Home and POLITE LIES: On Being a Woman Caught Between Cultures. Her essays and short stories have been published in the Harvard Review, the American Scholar, Colorado Review, Kenyon Review, and Best American Essays.

Kyoko teaches creative writing at George Mason University and in Lesley University’s Low-Residency MFA Program. She lives in Washington, DC with her two cats, Miles and Jackson. Her forthcoming book is CAT AND BIRD, a memoir about the cats who inspired her to make a home as a single woman and writer, and the birds she had the privilege of rescuing.

Her writing explores the human condition and reflects her faith in the fulfilling power of art, and the importance of art, education, and independence for women and girls. She speaks about women in the visual and literary arts; womanhood across cultures; fiction and creative nonfiction writing; and the deep connection between humans and animals. 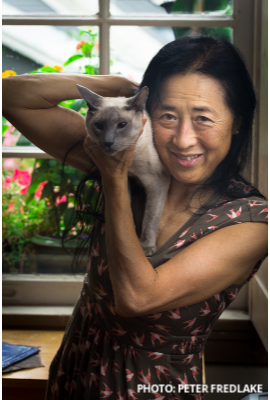