Emma Donoghue is an award-winning author of fiction, drama and film whose work has been translated into more than forty languages. She is the author of fourteen novels including the international bestseller ROOM, which has sold over 2 million copies, won the 2011 National Book Awards Paperback of the Year and Commonwealth Foundation Writer’s Prize for Best Book, and was a finalist for the Man Booker and Orange Prizes.

Her latest novel is HAVEN. In this beautiful story of adventure and survival, three men vow to leave the world behind them as they set out in a small boat for an island their leader has seen in a dream, with only faith to guide them. HAVEN “combines pressure-cooker intensity + radical isolation, to stunning effect. What is Divine Grace? Purity of soul? Virtue? Not what they think.” (Margaret Atwood)

Emma was nominated for an Academy Award and won the Film Independent Spirit Award for Best First Screenplay for her adaptation of ROOM. The feature film was nominated for 107 awards including Golden Globe, Bafta and 4 Academy Awards (Best Adapted Screenplay, Best Director, Best Picture, and Best Actress won by star Brie Larson). She is currently adapting her novel FROG MUSIC into a feature film, and her adaptation of THE WONDER, starring Florence Pugh, is streaming on Netflix.

Her theatre credits include Signatories, I Know My Own Heart, Ladies and Gentlemen, Kissing the Witch, Trespasses, and the stage adaptation of ROOM, hailed as “vital, imaginative theatre” (Time Out) and “thrilling, emotive and theatrically inventive” (The Stage).

Emma is also the author of several short story collections, literary histories and two novels for young readers—THE LOTTERYS MORE OR LESS and THE LOTTERYS PLUS ONE—described by the New York Times as “delightful… warm and funny.” 100% of Lotterys book royalties go to Room to Read, a nonprofit working in literacy and girls’ education across communities in Asia and Africa. 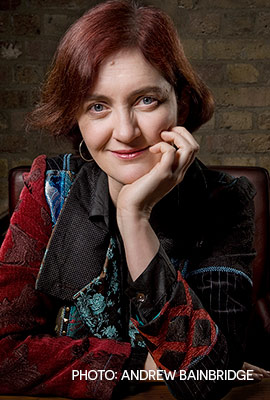 Haven “is a patient, thoughtful novel with much to say about spirituality, hope, and human failure, and about the miracle of mercy.” – Esi Edugyan, Giller Prize-winning author of Washington Black

“Haven is a beautiful and timely novel about isolation, passion and the conflict between obedience and self-preservation. The island setting and the characters stayed with me long after I finished reading.” – Sarah Moss, author of Summerwater

“The event with Emma was amazing; we’ve already received so much great feedback from our patrons . . . such a wonderful evening.” – Schaumburg Township District Library

“It was truly wonderful! Emma was so engaging and personable.” – Pikes Peak Library District

“The timeliness of Donoghue’s premise proves more than a gimmick. Her analysis of how pandemics place an undue burden on women resonates in today’s crisis: women make up the majority of essential workers and health care workers fighting COVID-19 in the U.S., and working mothers are covering the lion’s share of childcare labor while schools are closed. As many wonder what the setbacks that have resulted from the pandemic may mean for women’s equality, Donoghue’s book recounts a frightening history we must not repeat.” – TIME’s review of The Pull of the Stars

“She can do everything: be funny, be moving, be unflinching yet sensitive, write beautifully nuanced sentences and utterly gripping stories. She can write powerful historical fiction and be absolutely contemporary. And she’s unable to write a line you don’t believe.” – Joseph O’Connor, The Irish Times

“The whole city of Chicago is now in love with Emma Donoghue. Of our whole packed week of events, her two events were the most talked about afterward.” – Organizers of Columbia College Chicago’s Story Week Festival of Writers

Emma Donoghue on the roles of gender and sexuality in her novels.

Emma Donoghue discusses her novel, THE PULL OF THE STARS, a BN Book Club pick.

Emma Donoghue reads from and talks about her collection of short stories, ASTRAY.

A personal note from Emma Donoghue about THE PULL OF THE STARS:

This novel was inspired by the centenary of the 1918 pandemic, and I sold it and finished the final draft before the world was transformed by COVID-19. As soon as I began researching the Great Flu, one fact that leapt out at me was that women before, during and for weeks after birth were particularly vulnerable to catching and suffering terrible complications from that virus. I’ve put into this story some of the labour dramas of women I know (and one of my own) and all my gratitude to frontline health workers who see us through our most frightening and transformative experiences. I could have set ‘The Pull of the Stars’ anywhere, but I went for my home town of Dublin partly because Ireland was going through such a fascinating political metamorphosis in those years, and because I wanted to reckon with my country’s complicated history of carers, institutions and motherhood.