John Ghazvinian is an author, historian, former journalist and the Executive Director for the Middle East Center at the University of Pennsylvania. His new book, AMERICA AND IRAN: A History, 1720 to the Present, leads us through the four seasons of U.S.-Iran relations – the “spring” of mutual fascination; the “summer” of early interactions; the “autumn” of close strategic ties; and the long, dark “winter” of mutual hatred – and also shows how it didn’t have to turn out this way. “History in the hands of a master,” says Ambassador John Limbert.

He is also the author of UNTAPPED: The Scramble for Africa’s Oil – a high-octane narrative that reveals the challenges, obstacles, reasons for despair and for hope emerging from one of the world’s energy hot spots. John is the coeditor of AMERICAN AND MUSLIM WORLDS 1500-1900 and his writing has appeared in Newsweek, the Sunday Times, The New Statesman, Slate, and The Nation.

John speaks about the complex, two-centuries-long entwined histories of Iran and America, and what lies ahead for the two powers. 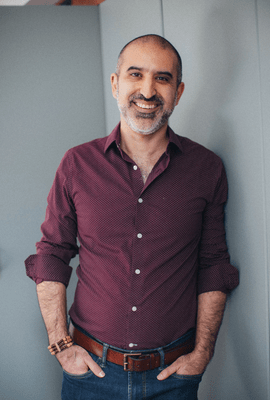 “This book presents the long, troubled relationship between the United States and Iran in a breezy and supple narrative, replete with poignant anecdotes, to posit convincingly that “antagonism between Iran and America is wholly unnecessary.”” –The New York Times

“John Ghazvinian describes in exquisite detail the relationship between Iran and the United States—from its inception in the years before the American Revolution to the present day. Beautifully laid out and at times reading like a thriller you don’t want to put down . . . Ghazvinian deftly shows us when, where and why things went (and still do go) wrong. If ever the question “why do they hate us” arises in the Iranian context, just read this book.” —Hooman Majd, author of The Ayatollah Begs to Differ

“History in the hands of a master. Ghazvinian leads us far beyond the mindless shouting of recent decades to tell a story of friendship, sacrifice, and discovery.  Should be required reading in both Tehran and Washington.” —Ambassador John Limbert, US Deputy Secretary of State for Iran (2009-2010); former hostage in the US Embassy in Tehran (1979-1981)

“[A] riveting account and superb analysis of what African oil means to a fuel-hungry world and to the African nations involved.” –The Boston Globe

“Perceptive . . . Untapped drills home the point . . . that a thoughtful strategy to lift the neglected bottom billion must compete against the global giants going about their business.” –The New York Times

U.S.-Iran Relations: A Look Back at a Tricky Relationship with John Ghazvinian

Hooman Majd interviews John Ghazvinian about his new book, America and Iran, at the Center for Brooklyn History.

John Ghazvinian in conversation with Ambassador John Limbert at Free Library of Philadelphia.

John Ghazvinian’s America and Iran: A History, 1720 to the Present, was named one of the 100 Notable Books of 2021 by the editors of The New York Times Book Review!