Laura Flanders is a New York Times bestselling author, award-winning broadcaster, and the host and executive producer of the Laura Flanders Show, which airs on PBS stations nationwide. Airing in 23 of the country’s top 25 television markets, the show explores actionable models for creating a better world by reporting on the people and movements driving systemic change, and spotlighting the solutions of tomorrow, today.

Laura is the recipient of an Izzy Award for outstanding achievement in independent media, the Pat Mitchell Lifetime Achievement Award from the Women’s Media Center, and a Cultural Freedom Fellowship from the Lannan Foundation “for her tireless work as an independent journalist, interviewing activists who are creating solutions to economic injustice and catastrophic environmental destruction.” She has reported from all over the world for media outlets like In These Times, New Directions For Women, Ms., Outweek, The Nation, and Pacifica Radio.

She is the author of six books including the New York Times bestseller, BUSHWOMEN: Tales of a Cynical Species and BLUE GRIT: True Democrats Take Back Politics from the Politicians. She is currently working on her new book, THE GRAND PERHAPS.

Laura speaks about the most pressing national and global issues: Racial and gender justice, politics and society, art and culture, economy, environment, and media as a tool for social change. 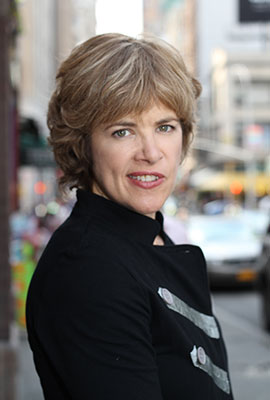 “Flanders’ fearless and humane journalism never fails to challenge our downsized politics of excluded alternatives. But it does more — Flanders wants her reporting to shift power, seed bold ideas and offer people a way forward that is about transformative not transactional change.” – Katrina Vanden Heuvel, editor and publisher of the Nation

“Laura Flanders offers a galvanizing vision of political democracy as it was meant to thrive: in the lives and stories of ordinary Americans.” – Michael Eric Dyson

“Bushwomen is the perfect antidote to cynical politics and corporate spin. As we’ve come to expect from Flanders, it’s a terrific read and just what we need—an accessible account of the far Right’s drive to power, and the women who front it.” -Susan Sarandon

Watch new and archived episodes of The Laura Flanders Show.

Creative Time Summit keynote on the need for creative approaches to crisis solutions.