In 2001, award-winning correspondent, Sarah Chayes, was sent to Afghanistan to cover the fall of the Taliban for NPR. She stayed. Over the next 10 years, she lived in Kandahar helping to literally rebuild. In that time, she launched an independent radio station, formed a dairy cooperative, opened a soap factory to give local farmers a licit alternative to the prevalent opium trade, and stood up to the network of corruption she encountered along the way – all in the midst of a reigniting insurgency.

The value of her unique perspective was recognized by the U.S. government. She was tapped to serve as special adviser to two commanders of the international forces in Kabul (Gen. David McKiernan and Gen. Stanley McChrystal), and former Chairman of the Joint Chiefs of Staff Adm. Michael Mullen. She is also one of the architects of America’s foreign anti-corruption policy. Following her tenure at the Pentagon, she exposed systemic corruption on every continent, and analyzed its toll on vulnerable communities as a Carnegie Endowment for International Peace Fellow.

Her books are ON CORRUPTION IN AMERICA: And What Is at Stake, THE PUNISHMENT OF VIRTUE: Inside Afghanistan After the Taliban, and THIEVES OF STATE: Why Corruption Threatens Global Security – the L.A. Times Book Prize winner that inspired Steven Soderbergh’s film, The Laundromat. ON CORRUPTION IN AMERICA draws alarming parallels between some of the most corrupt countries in the world and our own. It exposes the tradition of systemic corruption from America’s Gilded Age through present day, how it affects every level of society and threatens the future of democracy. “If you want to save America, this might just be the most important book to read now,” says Nancy MacLean, author of Democracy in Chains.

Her writing has appeared in the Los Angeles Times, the New York Times, the Washington Post, the Atlantic, Foreign Policy and Defense One. She is the recipient of Foreign Press Club and Sigma Delta Chi awards.

Sarah is internationally recognized for her innovative thinking on corruption and its implications. She speaks about how systemic corruption can prompt international crises such as revolutions, violent insurgencies, and environmental devastation. Other topics include America’s role in the global community, the modern “value” of money, ethics in business and government, social responsibility, and how corruption threatens democracy worldwide. 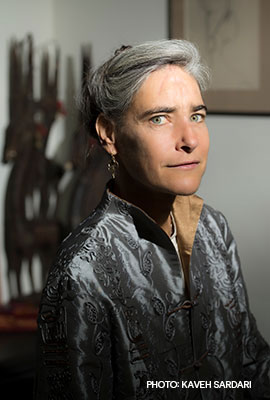 “Both right and left revile ‘the swamp,’ but Sarah Chayes is the first to provide a compelling–to say nothing of brave–account of how sophisticated self-dealing networks of every stripe are rigging the rules and poisoning our politics. If you want to save America, [On Corruption in America] might just be the most important book to read now.” –Nancy MacLean, author of Democracy in Chains

“Every now and then, a book changes the way you see the world. It’s like shaking a kaleidoscope and suddenly all the bits and pieces fall into a new pattern. Sarah Chayes’s Thieves of State: Why Corruption Threatens Global Security shook my kaleidoscope.” – Rebecca Gordon, The Nation

“I can’t imagine a more important book for our time.” – Sebastian Junger

“[A] fascinating story. . . .Chayes argues, convincingly, [that state-sanctioned larceny is] a threat not just to Afghanistan’s national security but to that of the United States.” -Patrick Radden Keefe, The New Yorker

“Sarah Chayes brilliantly illuminates a topic no one wants talk about―but we must. Corruption is an insidious force that is causing some of the most dangerous challenges our world is facing. It has to be at the core of America’s strategies, engagements and relationships for the twenty-first century.” – Admiral (ret.) Mike Mullen, former chairman of the Joint Chiefs of Staff

Sarah Chayes explains what happens when money is the measure of social worth.

CBC News: Sarah Chayes on what will happen now in Afghanistan

Sarah Chayes’s newest book is ON CORRUPTION IN AMERICA: And What is at Stake. Read an excerpt, listen to a sample, and order your copy here.

Inside the Hive with Nick Bilton: Inside the 9/11 Coverup Worse Than Ukraine: Filmmakers Steven Soderbergh and Scott Burns talk about their new movie, The Laundromat, and the book that inspired the screenplay – Sarah Chayes’s THIEVES OF STATE – in this episode of Vanity Fair’s podcast.