Valarie Kaur is a renowned civil rights leader, lawyer, award-winning filmmaker, educator, innovator, and author of the #1 LA Times Bestseller and Dayton Literary Peace Prize finalist, SEE NO STRANGER. She is the founder of the Revolutionary Love Project, recognized by President Biden as a healing force for America. Valarie burst into global consciousness when her 2016 Watch Night Service address went viral with 40 million views worldwide. Her question “Is this the darkness of the tomb – or the darkness of the womb?” reframes the historical moment and is now a mantra for people fighting for change.

Valarie became an activist when a Sikh father and family friend Balbir Singh Sodhi was the first person murdered in hate violence in the aftermath of 9/11. For two decades, in his memory, Valarie led visionary campaigns to tell untold stories and change policy on issues ranging from hate crimes to digital freedom. Her work ignited a national movement to reclaim love as a force for justice. In 2021, she led the People’s Inauguration, inspiring millions of Americans to renew their role in building a healthy, multiracial democracy. Today, the Revolutionary Love Project is seeding networked communities of practice across the country, equipping people with the practical tools to build beloved community and transform the nation from inside out.

In the last two decades, Valarie has won policy change on multiple fronts – hate crimes, racial profiling, immigration detention, solitary confinement, Internet freedom, and more. She founded Groundswell Movement, Faithful Internet, and the Yale Visual Law Project to equip advocates at the intersection of spirituality, storytelling, and justice. Valarie has been a regular TV commentator on MSNBC and contributor to CNN, NPR, PBS, the Hill, Huffington Post, and the Washington Post. She is a celebrated prophetic voice and has spoken widely, including at President Biden’s Inaugural Prayer Service. Valarie earned degrees at Stanford University, Harvard Divinity School, and Yale Law School, and holds several honorary doctorates.

A daughter of Punjabi farmers, Valarie grew up on the farmlands of California, where her family has lived for more than a century. Her grandfather gave her Sikh wisdom through stories and songs that showed the way of the sant-sipahi, sage-warrior. The sage loves; the warrior fights — it is a path of revolutionary love.

“The way we make change is just as important as the change we make.” – Valarie Kaur 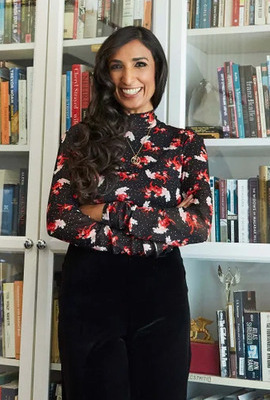 “In a world stricken with fear and turmoil, Valarie Kaur shows us how to summon our deepest wisdom.” – Elizabeth Gilbert, author of Eat Pray Love

“Valarie Kaur is a prophetic voice of our generation. Her wisdom ignites and inspires me, lighting the way through the darkness.” – America Ferrera,  award-winning actress, producer and activist

SEE NO STRANGER  “and the woman who gave birth to it have so much to offer the struggle for peace and justice as we move into a most complex and crucial century. Open up your heart as you open these pages and let yourself be inspired and invigorated by the way Ms. Kaur breaks it down.” – Ani DiFranco

“Valarie Kaur is a revolutionary for justice who shows us how to labor for the world we dream. In my darkest moments, I remember my Sikh sister’s call to ‘breathe and push!’ Her wisdom inspires us to build movements and seek the change that love demands.” – Rev. William J. Barber, II, president of Repairers of the Breach and co-chair of the Poor People’s Campaign: A National Call for Moral Revival

“Valarie Kaur was one of the most exceptional speakers/ thinkers I have ever heard…one of the most compelling young voices in America today.” – Melissa Harris-Perry, Host and Managing Editor, The Takeaway

“The intimate, raw stories in SEE NO STRANGER will break and awaken your heart; the profound teachings and compelling vision will inspire you to serve and savor our precious world.” – Tara Brach, author of Radical Acceptance

“Your plenary address was stunning and your words sent people away with a new fire in their hearts.” – Parliament of World’s Religions

“A standout figure…at the forefront of progressive change.” – Center for American Progress

The TED Talk: 3 Lessons of Revolutionary Love in a Time of Rage (3 million views)

Book Trailer: 'See No Stranger: A Memoir and Manifesto of Revolutionary Love'

SEE NO STRANGER: A Memoir and Manifesto of Revolutionary Love, is a #1 LA Times bestseller and a finalist for the Dayton Literary Peace Prize. Read an excerpt.

The Revolutionary Love Learning Hub is live!  Use this free online platform with research-backed tools to build beloved community. Go to the Learning Hub.

Just released! The Secret Wellspring: Uncover Your Wisdom Within What if courage, clarity, and joy weren’t fleeting, but a way of being in the world? What if we could make every choice from love instead of fear? There is a secret wellspring of wisdom within you, waiting to be found. Register for Valarie Kaur’s transformation lab.