Nicholas Boggs is the co-editor of the 2018 edition of James Baldwin’s LITTLE MAN, LITTLE MAN: A Story of Childhood and the author of the literary biography, JAMES BALDWIN: In the Full Light, forthcoming from Farrar, Straus, and Giroux.

Boggs was an undergraduate at Yale when he discovered the out-of-print 1976 edition of Little Man, Little Man in the university’s Beinecke Rare Book and Manuscript Library. This “children’s book for adults” would become the subject of Bogg’s senior thesis, subsequent publications, and ultimately shape his writing career.

His quest to republish the book took him to France where he met and interviewed French artist Yoran Cazac, the book’s elusive illustrator, saw the early drafts and original crayon illustrations, and visited the house where it was written. Lost for more than 40 years, Little Man, Little Man, is now available again and “it could scarcely be more timely” (New York Times).

Boggs is a professor of English at New York University. He holds an MFA in Creative Writing from American University and a Ph.D. in English from Columbia University. He is the recipient of Yaddo, MacDowell, and Camargo Foundation Fellowships, as well as the 2019 Robert and Ina Caro Travel and Research Fellowship from the Biographer’s International Organization. He was the spring 2020 writer-in-residence at the James Merrill House and was named a Leon Levy Biography Fellow for 2020-21.

His writing has appeared in the anthologies James Baldwin Now and The Cambridge Companion to James Baldwin. His literary biography, JAMES BALDWIN: In the Full Light, is forthcoming from Farrar, Straus, and Giroux in the U.S., Bloomsbury UK, and Editions Seuil in France. 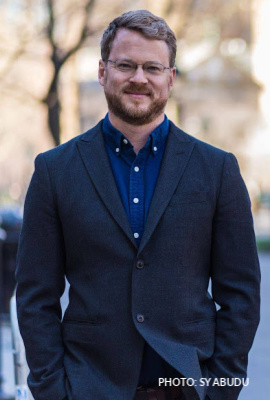 Boggs on Interpreting James Baldwin Today at the site of Baldwin's funeral, the Cathedral of St. John the Divine

Nick Boggs has been named a 2020-21 Leon Levy Biography Fellow!