His bestselling books include FROM INCREMENTAL TO EXPONENTIAL: How Large Companies Can See the Future and Rethink Innovation, YOUR HAPPINESS WAS HACKED: Why Tech Is Winning the Battle to Control Your Brain – and How to Fight Back, THE DRIVER IN THE DRIVERLESS CAR: How Our Technology Choices Will Create the Future (finalist, 2017 McKinsey / Financial Times Book of the Year), THE IMMIGRANT EXODUS: Why America Is Losing the Global Race to Capture Entrepreneurial Talent (2012 Book of the Year, The Economist) and INNOVATING WOMEN: The Changing Face of Technology.

Wadhwa contributes to Foreign Policy and has been featured in the Wall Street Journal, The Economist, Forbes magazine, The Washington Post, The New York Times, U.S. News and World Report, and Science magazine. He has appeared on American and international television, including on CBS, PBS, CNN, ABC, NBC, CNBC, and the BBC. He has been named among Foreign Policy’s Top 100 Global Thinkers and TIME’s Tech 40. He is a recipient of Silicon Valley Forum’s Visionary Award and Forbes.com named him a “Leader of Tomorrow.” The U.S. Government awarded Wadhwa distinguished recognition as an “Outstanding American by Choice” for his “commitment to this country and to the common civic values that unite us as Americans.”

“Innovation is all about people. Innovation thrives when population is diverse, accepting and willing to cooperate.” – Vivek Wadhwa 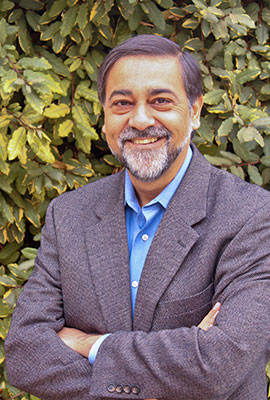 FROM INCREMENTAL TO EXPONENTIAL “provides an invaluable road map for business executives in how to reinvent their companies—and own the future. It is a wonderful read!” – Indra Nooyi

“A leading voice in debates over technology policy, particularly with respect to entrepreneurship, innovation and immigration.” – TIME Magazine

“Vivek possesses the brilliance and vision to foretell the technological path that will define our future. More important, he has the heart and compassion to trumpet the clarion call so that , as business leaders, we know how to take our employees with us on this journey of innovative enlightenment.” – Lynn Tilton, CEO, Patriarch Partners, LLC

“Vivek raises one of the most important issues of our time – the use of technology to uplift rather than displace humans.” – Satya Nadella, CEO, Microsoft

“Our constantly-in-change world is now running on ‘exponential time,’ and this disruption has huge consequences. Vivek gives us the prism to make sense of it all.” – John Sculley, former CEO, Apple

TEDxGATEWAY: The World Has Changed: Navigating Technological Change For A Better Future

While the world has been sheltering in place, Vivek Wadhwa has been collaborating with HealthCube – a producer of portable medical diagnostic devices – to effectively and affordably identify individuals with a high risk of mortality from COVID-19, to integrate next-generation antibody tests, and to develop innovative re-opening methodologies currently being piloted in India and Latin America.

Vivek Wadhwa’s new book is now available! FROM INCREMENTAL TO EXPONENTIAL: How Large Companies Can See the Future and Rethink Innovation was specifically written for business executives and fledgling innovators.

Foreign Policy asked seven leading thinkers for their predictions about the future of travel after the coronavirus pandemic. Read Vivek Wadhwa’s contribution.